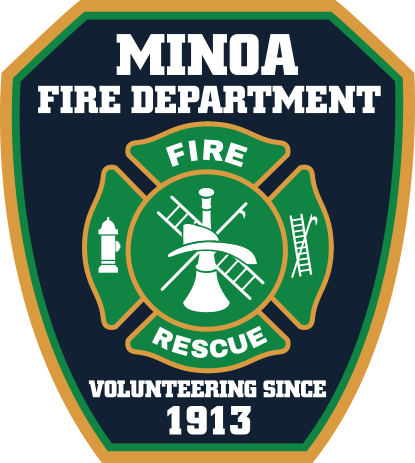 Last night members trained on vehicle stabilization and lifting using Res-Q-Jack while a vehicle is on its side. We also simulated patient removal through the driver door when that side is vertical and also folded the roof. The drill was led by 2 instructors from Take The Door Training. Today our Captain of Fire Police FF N Erard Jr completed his final skills practical on Ladder 22. FF N Erard Jr joined the Minoa Fire Department in January of 1974. With nearly 49 years of active service he continues to serve the department as a Driver/Pump Operator and also holds the rank Captain of […] On behave of the Chiefs, Line Officers, and Members of the Department we want to give recognition to FF D Cavanaugh and FF C Decker. Last week they completed and passed NYS Interior Firefighting Operations Class. Both FF’s joined the department this spring and got right into the BEFO and IFO course that started in […]

Top 5 Responders for the Month of September Did you know that October 9-15 2022 is Fire Safety Week. Does your family have an evacuation plan during a fire? A meeting place outside the house during an emergency? Do you and your family know how to report an emergency? Have you checked your smoke detectors lately to make sure they work? Changed the […]

Goodbye and Thank You Engine 37 Yesterday the Department sent a final farewell to our 1996 Eone Engine 13 or otherwise known as Engine 37 for the last 1.5 years. This apparatus serviced the Minoa Fire District as a primary engine out of Station 1 to all vehicle accidents, car fires, and mutual aid alarms to neighboring departments. It was replaced […] Some pictures from the elevator tech class by instructor Mike Dragonetti at the Heavy Rescue Conf. Members in attendance were Deputy Chief T Visser and Capt B Schermerhorn. If you are looking to join our team, check out our Join Section to see what we have for you.

On 7/31/22 at 2253hrs we were dispatched mutual aid to East Syracuse on a structure fire on N Midler Ave. L22 (Capt Dibello) responded and assisted with extinguishment and overhaul. At 2341hrs we were dispatched for a second unit to respond. E13 (Capt Van Auken) responded to assist with extinguishment and overhaul. Also during this […]

Being a volunteer of the Minoa Fire Department offers the flexibility to serve close to home and serve your community part-time. In return, you’ll get cutting-edge training, great benefits, and valuable job skills that can help you get ahead.
Apply Today